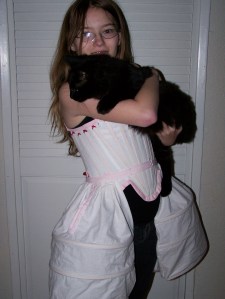 I have just finished Victoria’s 18th Century corset. Why did I make Victoria an 18th Century corset? Because in a rare bit of mother-daughter bonding she told me that she wanted one of those fancy dresses from the Colonial/American Revolution era. So after some research (which did require some arm-twisting) I was able to determine that she REALLY wanted an a la englaise.

So as with all good costuming, the underwear comes first. My good friend Hannah was over one day and was able to draft a pattern for a corset. The photo contains the finished product. Along with the pocket hoops that *only* took 5 hours from idea to completion made by Hannah as a gift for Victoria. Victoria’s only job is to add a hook and a bar to the waist band of the hoops. 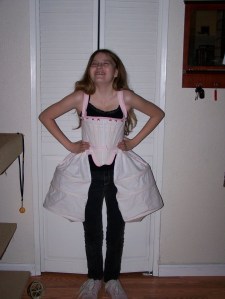 Alteration notes have been taken on the corset – it needs to be longer and smaller in the shoulders. As it stands now the corset closes and the back. Because of her scoliosis, the front doesn’t look just right – to help with that I may add an inch to the top of the left side. This will make the corset look odd on paper, but should help with coverage in her front.